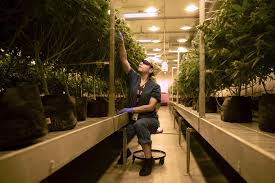 In the past six months, Illinois marijuana companies have gone public in Canada, raised hundreds of millions of dollars to fund expansions and consolidated through a number of deals — one topping $680 million.

“The state’s medical marijuana companies are moving at a fast and furious pace. They are largely past the days when growth was stagnant and there was a stigma around weed. About 60 percent of Americans think recreational marijuana should be legalized, and Illinois just elected a governor, Democrat J.B. Pritzker, who has said he is one of them.”

“Cannabis companies say the stars are aligning for growth in the nascent industry, born just three years ago in Illinois as a pilot program for patients with a limited number of medical conditions. Expansion hasn’t been without its twists and turns, but Illinois companies are betting on the future.”

The pot industry gained a foothold nationally in Tuesday’s midterm elections too. Michigan — about an hour drive from Chicago — became the 10th state and the first in the Midwest to legalize recreational marijuana. Missouri and Utah approved medical use.

“In theory, this was always the path forward,” said Charlie Bachtell, CEO and co-founder of Cresco Labs, which in the past month has raised $100 million and announced plans to acquire a dispensary and go public in Canada. “But how we got here, when we got here, why we got here I think has been an interesting journey.”

The total legal U.S. marijuana market is expected to hit $11 billion in sales this year and $23 billion by 2022, according to a report out earlier this year from California-based Arcview Market Research.

Marijuana remains an illegal drug in the eyes of the federal government. Jeff Sessions, who was not friendly toward recreational or medical pot, was ousted as attorney general Wednesday. But a federal ban still keeps big banks and other large institutions and investors away.