Home Part 2: Anon, A True Story Of Marijuana In The Military

Part 2: Anon, A True Story Of Marijuana In The Military 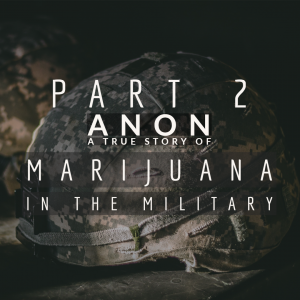 Please make sure to read Part 1: Anon, A True Story Of Marijuana In The Military, before going further (Click Here).

As mentioned in Part 1, Bogs of Cannaplayground met with a veteran who has had many experiences with marijuana in the military.

As previously discussed, Outlaw Seven had just realized he passed a drug test and felt a sense of relief.

He describes other situations he found himself in a while still deployed. In Kandahar, he would see the Afghan police still smoking hash and even doing heroin.

He recalls a point where they were dealing with about five million dollars worth of pure heroin that they had to dump out in a small wadi, they found it from raiding a compound.

Outlaw Seven: “the reason why we destroyed the heroin was to deny the Taliban of ways of getting funding. All the drugs they sold would help the Taliban in there cause. The Taliban would force farmers to grow poppy or marijuana. That man was so scared that we were taking his heroine”.

After I was leaving home, I instantly knew we indirectly killed a man. Later that night, our base was getting hit with over 10 RPG’s, the Taliban was PISSED over what had transpired previously. We would also burn fields of marijuana to deny funding to the Taliban further”.

He also recalls a time where he was bedridden at the base, and when the team was out during the night, he would smoke hash out of a cigarette with his interpreter. At another point, because of the constant firefights his team would find themselves in, he decided to light up a hash cigarette while on top of a turret with his truck commander sitting inside the vehicle as they were heading to Kandahar. He says, “I’m not proud of that at all. I was just a dumb kid. I thought I was gonna die, so I guess I was in a psych mode where I’m like, ‘if I’m gonna do this, I guess I’m gonna die on my terms.’”

Eventually, Outlaw Sevens tour was over, and he was well on his way to coming back home. He tells another story while they were waiting to go home in Camp Phoenix.

They would go to the contract workers side of the base and sit in a gazebo with about 10-15 of his friends.

They would roll these hash blunts and take turns taking puffs late at night. Since they had nothing to do the next day other than not die from incoming rockets, they all agreed that it was ok. The mission was practically over for them. He then introduces someone that he called “Tigger.”

I wouldn’t call him a genius, but damn he was very innovative, one time after he got hit with an RPG. I saw him a week later (still shook up from the incident) sniffing this white powder up his nose.

I found out later that he was doing heroin because he couldn’t cope. I was 20 years old at the time, and I had no idea what it even was, let alone know how to help him.”  He would take cans of Skoal and heat them under simmering water so the seal would expand.

Once the plastic seal was warm enough, he could package at least a pound of hashish in the tin can, maybe even more.

Then after hashish was packaged up, he would then take the seal and put it back on like nothing ever happened.”

Cannaplayground: According to Outlaw Seven, he had done that around 30 times. He says:

Cannaplayground: They went through customs, scared for Tigger, who also managed to smuggle a white scorpion inside a mason jar between in his crotch as well.

“this kid literally would go around collecting moths to feed his damn pet scorpion, everyone thought he was going fucking crazy, but some of us knew.

It was because he had to feed his friend”. Finally, though, we got to Fort McCoy, and we blazed the fuck up. We’re finally home; we’re at base. We should have been caught there too, but we didn’t.

We would smoke at an abandoned church, is that ironic? Then everyone just went their separate ways. He quickly sold probably almost all of it. Easily.

The thing about that is some of us didn’t come home. Some of us died overseas. Some of us killed ourselves after the fact, no one indeed just came back like everything was O.K.”

Cannaplayground: Back at home, Outlaw Seven started to sell weed again, but he didn’t do it as much as he would before joining the Army. He mentions still having a terrible relationship with his father. He went back to school right away to a university in the state.

After the university, he moved back home and found himself working in what he described as “odd jobs,” such as landscaping and logistics for a furniture company.

“I think that the breaking point was when I got a DUI. Moreover, I  isolated myself for six months. I worked at a Walgreens as a photo specialist, developing film and stuff. I stopped selling. I sold my car to my dad, and I moved to the city.

That was Seven years ago around this time. I had like $2,000 or $3,000, and I worked at this French bistro. I tried to sell again, but it just didn’t work out the way I wanted. I didn’t know anyone, so it wasn’t working out for me. I ended up befriending this guy that worked with the VFW.

That’s when he looked into my eyes and saw how distraught I was; he saw how lost I was. Then that’s when my life started to improve. I did get the help I needed and started going to therapy.

I began to go to community college in Chicago. I grew so much from those three years just from the impact of one person.

I intend to devote myself to being an advocate for medical marijuana and mental health for veterans. because I’ve seen the benefits from it, especially from my point of view.”

Cannaplayground: From the sound of his voice, one can tell he had been through a lot during his lifetime. The memories that he had to dive deep into to tell his story made him emotional. I found it appropriate to bring this interview to a close.

I asked him for one last comment that he wishes anyone reading this to know:

“For all those listening, especially veterans who experience hardships. If your feeling distraught, overwhelmed, constant feelings of anxiety, depression, glorifying your death. Get assistance at your nearest V.A Hospital, or a Veterans Affairs.

It takes much courage to get help. I’ve been there before, and I owe it to another veteran who saw how lost I was.

Medical marijuana and CBD, especially CBD, will help you sleep, and that’s so important in regards to your mental health. I lost count of how many nightmares I’ve had, how many times I’ve been burned alive in my dreams. How many times I’ve had to fight the demons that followed me around. I remember being too scared to fall back asleep at times. Too many times. So I hope you can take my advice.

The world isn’t going to end; it keeps spinning long after you’re gone, but it’s not your time to quit, not ever. Lead by example, help others, it’s your duty and your oath to your country. To serve and protect, never doubt yourself.

Cannaplayground: A story isn’t worth telling unless it’s true, incredible.