Home How Long Does Weed Stay In Your System

How Long Does Weed Stay In Your System 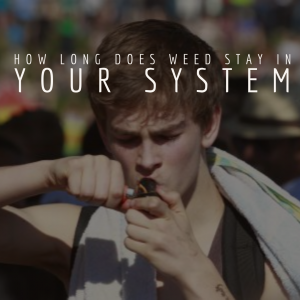 This article is about how long THC remains in your body system.  Also see how long a high lasts

Factors affecting how long weed stays in your body

There can be significant differences in times cannabinoids can be detected in someone’s system. This could be crucial in your calculations for avoiding the heavy hand of the law or your boss.  It also varies based on upon the type of test. A blood test especially will have the following factors affect detection times.

Cannabinoids are lipid-soluble, which means they dissolve in fats. If your body has a high-fat content (you are overweight or heavier), cannabinoids are more likely to remain in your body for longer. There is no hard and fast rule for how long, but if you’re trying to avoid detection, losing weight might help.

The amount of THC in the weed you use can vary hugely. Typically good marijuana strands have between 6/8% and 14% THC, which is a lot. Of course, if the weed you smoke has higher levels of THC, there is going to be more in your body and therefore take a longer time to filter out.

Some experts believe exercising can increase the time for THC to filter out of your bloodstream. The idea is that when you exercise, you break down fat cells for energy. There is THC stored in them, and this gets released into your bloodstream. However, many experts diasgree with their own studies. Thus, don’t worry about exercising having any significant impact on detection.

Your metabolism, however, can make a difference. People digest THC at different rates due to their differences in metabolism. There is, however, nothing you can do about it except keep fit and healthy so you reduce fat in your body.

The theory goes that if you are dehydrated, your urine will be more concentrated and the THC will be easier to detect. Drink lots of water and dilute the cannabinoids and get away with it. However, the tests detecting THC are very sensitive, and if it’s only a couple days out, it’s very unlikely you can get away with it.

The following table has the length traces of THC is detectable in the body. Source.

The most common form of a cannabis drug test is a urine test. When your body metabolizes THC into THC-COOH, that THC-COOH finds its way into your urine. For occasional or single users, cannabinoids will be detectable in your urine for around 7 days. For regular users, cannabinoids can be detected in your urine for at least 30 days, and for some people, it can be as long as 3 months. Recent studies have shown that this might be an overestimate, with one study showing cannabinoids remaining in the urine for only 15 days. However, it is not a chance you would want to make, so ensure you get at least a month’s lead on any test.

Cannabis use is easily detectable in hair follicle testing for heavy users. If you’ve only consumed small quantities, it probably won’t turn up in your hair. This form of testing is rarer and takes longer than urine testing, it isn’t often used outside of places like prisons.

Blood does not hold cannabinoids for as long as urine, surprisingly. For people who use weed regularly, blood concentrations of THC fall to undetectable in 2 to 7 days. If you just had one joint, it will probably only be detectable in a 24 hour period. After that, you’re OK. Nobody uses this test much except researchers.

Saliva can contain THC for a little while, but in a few hours, it is gone. A very unreliable method of testing.

How to pass a test

While you cannot reliably cheat a test, if you have enough time you can take steps to give yourself the best chance. The tests are quite reliable and are relied on in courts, so you know they work well. Of course the best way to avoid getting a positive test is to not use cannabis in the first place (or at least for a time period before the test).  However, you don’t have to have 0 trace of THC to pass a test, rather you have to be under a certain threshold (typically around 60ng/ml).

Try the following to beat the test:

If you have a month or more lead time, and are willing to abstain for a while, try these:

Why does Cannabis Stay in your System?

Cannabis is packed with chemicals called cannabinoids. These are what have effects in your body. The one that gets you high is called THC, you’ve probably heard of it. Others include CBD and THCV. As far as this author can tell, nobody cares about CBD. The real “enemy” is THC.

When you take cannabis, you will probably get between 8% and 14% THC into your bloodstream. Here, it floats around and interacts with your cannabinoid receptors. In the brain, this gets you high. In the body, it can be an anti-inflammatory or have any number of (poorly understood) effects.

Your body can only break down so much THC in a given time. Even when you’re not feeling the effects, there is still a measurable amount of it in your bloodstream, floating around and eventually getting degraded by the body’s enzymes. One of the metabolites (the product of your body’s metabolism) of THC is THC-COOH, or “carboxy THC”. This has an amazing name: 11-nor-9-carboxy-Δ9-tetrahydrocannabinol.

This chemical is what urine tests look for. Strangely, concentrations of this chemical can peak up to 3 days after you took cannabis, so you know that you will have to wait at least that long before cannabis is undetectable.

Marijuana is quickly becoming “more legal” and more people are enjoying cannabis than ever before. Unfortunately, the devil’s weed is still surprisingly illegal in most of the world, and getting caught could really screw things up. Even where weed is legal in the USA, employers regularly drug test their employees for traces of marijuana. It’s possible to lose your job or worse if your blood has cannabinoids in it.

Sometimes, it’s pretty reasonable. If you are operating heavy machinery or in a position of responsibility, your employer has a duty of care to ensure you are not under the influence of drugs, legal or not. Other times, it can seem like a total irrelevance – why does anyone care whether a store clerk smokes a joint on a Friday night instead of drinking beer?

Whatever your reasons, knowing how long cannabis can stay in your bloodstream is important. It means you can enjoy your favorite herb and ensure that the powers that be do not come crashing down on you. Planning isn’t something that weed smokers are famed for, but with the right information, you can keep yourself safe.